Critical Literacy: Advertising is Our Environment

The images appeared above were found in several magazines that I owned. Also in locations such as the subways, train transportation's, bus stops, stands in the streets, and newspapers. I also found the images in the stores itself, which would make me want to buy the certain clothing item so I can "look" like the model wearing the specific clothing item. I was able to gather these images because ads are all over the city, especially in a populated area with adolescents around, ads will do almost anything to attract them.

I added captions under each category of the image presented above. For the first caption I stated, Body Image. I used this to represent the first images because the body of the women are being used to sell clothing items but also are showing the ideal body image size or shape. Typically it is a slim figure. The the second image it is a model opening her legs while laying on the floor. The advertisement is selling bathing suits yet I do not find a reason on why the model has to lay on the floor with her legs open. The third image is a model who is modeling for the purse from Guess. Although the model is wearing revealing clothing with her legs in the air. Once again, the legs of women are being as an object to sell something from a specific brand. The fourth image is from American Apparel. The legs of women are always being opened. This image of all really offended me. The fact that a man is standing in front of her while her legs are open quickly made me think that the women are not seen as anything else but a sex object. This advertisement has been on many teen magazines, websites such as Facebook or Tumblr. Most of the girls will see this and think that they should only be opening their legs to men.

The next category of the images is labeled as Face. The first image is a model with pore-less face with writing in the bottom that states, "Don't mask me" this ad is to sell makeup. Although the statement is quite ironic because the model has her face Photoshop with no wrinkles or spots in sight. The model's face is flawless so the statement would go against the Photoshop. Not only is this considered "fake" but many young girls believe that this is quite true to achieve. The second photo is another makeup ad. The statement states, "..the untouched makeup ad" now I am not sure whether if this is true or not but I do not believe the statement. I say this because before a picture is taken there are lights specifically placed to make the model look flawless. The third image shows a model removing a certain layer of skin. The layer of skin she is removing seems to be more on the medium skin tone with freckles. Seeing this image makes me think that not being fair tone with flawless skin is bad and that women should change to be accepted to society today. The fourth image is a model wearing Tom Ford's makeup line. Although, instead of the model ? Is this correct? Why can't it just be the model posing by herself?

The third category, I labeled it as Body Weight. These ad's are representing the body and the ideal image and shape it should be. The first image is a Deodorant as that has a woman modeling for it. It states, "I'm the boss of me, That includes my armpits" I didn't really have much problem with the ad, only that they had to use a women to represent the ad. The second image is something that always pops up on websites. This is a ad that claims to have tricks to reduce fat in the stomach. I have never clicked this ad because I believe it is a virus but the fact that ad's find ways to attract the people. Many people struggle to have a slim figure and having ad's like this will make them want to buy certain products just so they can become slim. The third image is from a teen magazine. This ad claims to remove all body fat without any permanent of swollen scars. Once again, in modern society, people have to look at this everyday and have to think that they're not slim enough or have a "perfect" body shape.

The next category is labeled as Clean Face. Neutrogena has a lot of ads to improve the clearness of the face. This is just an ad that is presented in teen magazines. Knowing that during our teenage years, we will have hormones that will show on our faces causing breakouts, this is a good way to advertise because teens will see this and want to buy this product to clear their face. The second image is also a face cleanser. Although the advertisement bothered me because it states that is I have a clean face I will eventually have an amazing life. It makes teens think that the only way to have a good life is if you have clear skin. This relates to the Photoshop models, which basically state that the only way to be and feel good is to be "perfect" even though it is unnatural to achieve without surgery or Photoshop. 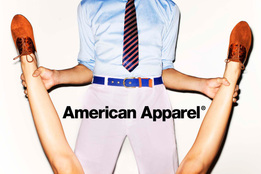 The image that I have chosen to analyze is the ad for American Apparel. Which is under the category of Body Image. This image is to advertise for American Apparel clothing, the men's wear and the women's shoe wear. Although the way the image is presented bothered me. Having the model with her legs up on the air seemed to me that the women was being considered as a sex object. This visual message being shown is overt. Although there is no message, but just the name brand being shown. Stereotypes are being used here, such as the women having to open her legs in front of the man. Not only is this ad very overt it is also seen in every other photo from American Apparel. Power, dominance, and inequality is being presented in this ad.  The power of the general public of women is being publicized as it is stating that women are considered weak therefore their only purpose is to open their legs. Dominance of the men is being shown here as the man in the image is holding the legs of the women. Men who see this ad will begin to think that it is their job to do what the image presented. Inequality is being shown here only throughout the fact that the women is opening her legs to the man. This is quite disrespectful for many women because it makes women be considered as objects and not just a "normal" person. There should be more models who look "normal" and not do things in front of a camera such as opening their legs and exposing themselves.

Overall, the results that I received in this assignment is that the women in ads are being objectified and most of us do not do anything about it just because it is now considered something "normal" that there is no reaction towards it. Implications of this on young people are being overly affected because young girls who see ads like this begin to have a low self-esteem and begin to hate themselves for who they are because they want to look or appear like how the models look on the ads. Therefore ads like this should become more realistic or should not be as exposed to younger girls who will begin to feel judged or criticized. Although I consider that the models are to express femininity, I consider it to be a good thing just that women should not be presented as sex objects. If the ad increases this young girls by the age of ten will want to expose themselves more because the women in most ads are being presented as sex objects. I believe this should stop because the girls who are younger including adults today begin to feel as if they are not "good enough". Even if this is the message that is to be sent out for others, just so the company could sell their items I think it should be considered that the people in ads are not really real therefore people should not get a low self-esteem.

Advertisements affects the way we see ourselves and those around us. Advertisements in women's magazines usually range from perfect slim models to flawless skin and features. Most faces shown on magazines are usually models with fair skin tone, blue eyes, perfect face and body features. If you analyze these images closely, the women models are placed as objects. Several images above demonstrate models wearing revealing clothing and men holding them. This is represents women as an object, as if their job is to attract men. Many adolescents nowadays see this advertisement and begin to think that they have to look and act a certain way. Magazines have their front page with a perfect model  and notes on the side saying, "New fashion items!" or "Sex tips!" even with titles that are stating, "loose weight by doing these tricks.." Not only are they in magazines but also the internet, one could open their laptop to a certain web page or just apps and different ad's are their. The images included were of women with revealing clothing and men holding them. What should be included is women who look more "normal" rather than an impossible to reach body. Something more accurate that will not place such a low self-esteem on adolescents and women. The number of times that women appeared on the images above are 14 times. Most of the women in the images are wearing revealing clothing or are with men or have Photoshop. The particular words that are shown above are "beauty", "new". "fashion" and "weight.