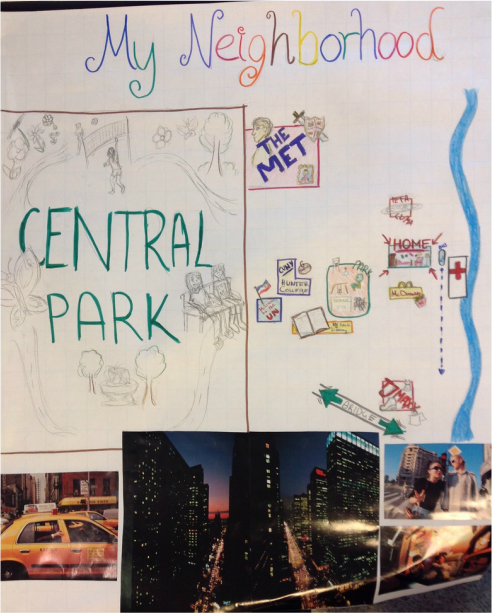 The process of mental mapping has taught me a lot about my peers and classmates that I did not know before, and has opened up my eyes to a wide range of experiences and neighborhoods previously unfamiliar to me. We discussed a variety of topics in class, and I was able to gain insight into other people's opinions and perspectives on the world, which I found fascinating. I think the process required a lot of listening and analysis, which at times made it a little dry, but I was able to gain a lot of knowledge. I learned about the asset and deficit perspectives, and how often society focuses on people's flaws and what a neighborhood may be missing, instead of focusing on all the things it does have. I also learned that we had a lot of common themes between groups, which shows how similar our experiences as young adults can be in a busy metropolis; however, as Taylor pointed out, there is no one single story of what it is like to be a teenager in NYC.
Some of the questions that emerged were: are stereotypes strengthened by diversity, or does diversity stifle them? Why are the image and reputation of a neighborhood so important to others' perception of the people who live in that neighborhood? Why do our and society's expectations of people vary based on the neighborhood where they come from? Why is there so much inequality and so much discrimination in the world? Will the world ever be equal or equitable for everyone? Will we ever be able to say that there is no inequality, and truly mean it and know it to be true?I think these questions are best addressed through research and discussions, and a lot of in depth thinking and analysis. And I think that for some questions we may never know the answer, although we can speculate.
If we were to share our research in a formal way (publishing), I would share what our group themes were, what we had in common as well as what differed. I would not share our personal experiences if they included a lot of personal  details, because even if we use aliases, it is still personal information . The main people I would informally share my research with (talking and discussions) are the people in our neighborhoods, because we would be able to show them what our perceptions of the neighborhood is, and perhaps determine what can be done to fix the negatives about which we talked about.
I think mental mapping is a useful methodology in exploring ourselves and our relation to our neighborhood; however, I think that it did not fully address the answers to our research question. I think in order to answer those questions, we must do an in depth analysis of our answers, our themes and our maps. I think that by explaining themes in groups we were able to collect different information regarding ourselves and connect to others through similarities and learn to appreciate others' differences. I think the class discussion was a little dry and repetitive in terms of how we analyzed each group's map. We did not spend a lot of time talking about the connections between the themes as much as we spent retelling our personal experiences. Another way that I would address our questions about neighborhoods is through interviews with people from the neighborhood and through analysis of the neighborhood (maybe moving around the neighborhood without interacting with it, but acting as an observer, taking pictures and notes).