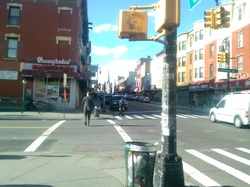 Born and raised in Greenpoint, Brooklyn all my life for 17 years I’ve seen the changes my neighborhood has gone through including my parents when they first emigrated from Mexico to Greenpoint. I am Mexican American and from living in a predominately white neighborhood that has shaped who I am because I am trying to keep my cultural identity where it is excluded. Greenpoint has been for many years a white and polish community and neighborhood over the past years. I am part of the minority in Greenpoint which are the: Hispanics, Asians, and African Americans. Being Hispanic or any other race in my neighborhood is tough and isolating because sometimes you have to face racism, the discomfort of not being the same ethnicity of the predominant group because you are “different”, and are judged by typical stereotypes of ethnicities in general.


From living in Greenpoint for 17 years I’ve witnessed how my neighborhood isn’t diverse and is segregated. When I was younger it was very obvious to me. When I was five years old I went on vacation to Mexico for six months and during those six months I went to elementary school there which meant I only knew spanish. Then I came back to Greenpoint to start kindergarten and it was a life changing experience because I was only five and I didn’t know how to speak english. P.S. 34 was a elementary school that was predominantly white and polish so it was hard for me to communicate with other students. But by going to this elementary school it portrayed how my neighborhood was exactly. If you weren’t Polish or white it was very tough to fit into the community and neighborhood. The high discomfort of not fitting in with the predominant group comes with the fact that I stand out in the sea of white children in my school. I think I’d feel more comfortable if I could relate with other students that have the same culture as me. In school it was different because everyone had to be friends  but if I didn’t go to P.S. 34 I would feel more isolated than I already was.
Isolation was common as I was growing up in my neighborhood. I grew accustomed to feeling of being isolated in my neighborhood because I wasn’t part of the predominant group. Isolation in my case means to me that I can’t culturally communicate with the rest of my community, not be able to speak the native language which the populace speaks which is Polish, and how the community is mapped out. I am part of the minority in Greenpoint and that usually means that the minorities are located North of Greenpoint which is close to abandoned factories and near the East River. On the other hand the white and polish populace lives on Manhattan Avenue which is a commercial street where stores and restaurants are located. Even though I am a minority I live on Manhattan Avenue because of my father. Since he works on the avenue in a pizzeria, the man in charge, also is my landlord, gave my father the opportunity to rent an apartment on the avenue. If my father didn’t have the connection most likely my family and I would be living near North of Greenpoint. Even by housing one can see the segregation between the predominant and minority group in Greenpoint.


Although living in my neighborhood it is obvious that everyone in my building is mostly white or polish because I live in the Middle of Manhattan Avenue. In my building everyone is white and polish except for my family and a Puerto Rican man. Greenpoint has been gentrified by many factors especially influenced by the high populace of Polish people living in Greenpoint. Polish people being the predominant group would be prone to stopping change from happening in Greenpoint therefore excluding other ethnicities. Greenpoint’s rent has been gradually increasing making it harder for minorities to live in Greenpoint. Minor ethnicities of people in greenpoint such as Hispanics, African Americans, Indians, and Asians have been pushed to the North of Greenpoint because it is no longer affordable to live on the commercialized street, Manhattan Avenue. Even now as rent has increased it has also increased in North of Greenpoint forcing the minorities to move out of Greenpoint completely. This is clear that Greenpoint is not a diverse nor segregated neighborhood and community.


As Greenpoint is changing another group of people are becoming dominant as well which is affecting the predominant group. “Hipsters” are a group of white people who travel and don’t follow trends, they typically march to their own beat. These “hipsters” also affect how Greenpoint is because they are also displacing the minorities by making the rent higher which then excludes the minorities even more. That is one of the major problems in Greenpoint which is letting less diversity into my neighborhood. Another is transportation in Greenpoint, Greenpoint is borderline along Long Island City, Queens so it makes it hard to move around to other places and boroughs. The only train available is the G train and it is very unreliable on weekdays and especially on weekends. Making Greenpoint more limited and isolated than it already is.


My neighborhood seems as it was made for the predominant group and no one else, the polish people. The reason I feel this way is even though most of the populace in Greenpoint is Polish; they also influence the way the neighborhood is mapped out. Meaning most stores are polish to satisfy the needs of the predominant group and not the minorities. Even the American chain stores have polish products and nothing else like Associated and various 99cent stores that are owned by Asians. For example: These pictures were taken in Associated the week before Easter.
Polish pasteries for Easter
Polish writing advertising cookies.
In these two pictures it shows how even Associated, an American chain store is segregated by the products it sells and is in the language of the predominant group in my neighborhood. It meets the need of the predominant group in Greenpoint. It's a disadvantage, especially since I'm hispanic and part of the minority group. I don't eat or buy the same products as polish people do. It's such a hassle always having to go farther away to get produce from my culture. I personally do not do the shopping in my household, my mother does. She’s always fussing about how she can’t buy any products of her choice in our neighborhood. I know that she would go to BJ’s to get products in quantity because it’s cheaper. But if she specifically wanted Mexican products she’d have to go deep into Queens near Roosevelt or to Graham which is close to Greenpoint by bus or the M train.

In these two pictures it shows how even Associated, an American chain store is segregated by the products it sells and is in the language of the predominant group in my neighborhood. It meets the need of the predominant group in Greenpoint. It's a disadvantage, especially since I'm hispanic and part of the minority group. I don't eat or buy the same products as polish people do. It's such a hassle always having to go farther away to get produce from my culture. I personally do not do the shopping in my household, my mother does. She’s always fussing about how she can’t buy any products of her choice in our neighborhood. I know that she would go to BJ’s to get products in quantity because it’s cheaper. But if she specifically wanted Mexican products she’d have to go deep into Queens near Roosevelt or to Graham which is close to Greenpoint by bus or the M train.
People walking up Manhattan Avenue near the B43
North of Greenpoint - Polish ladies in their group and talking in their native tongue. (Polish)
These other two pictures that I took also represent how I feel isolated and excluded. Just by me walking down my neighborhood and taking these pictures you don’t see other ethnicities. It’s either caucasian or polish people. That’s why I feel that Greenpoint should be diversified. It’s tough to fit in when the predominant group excludes other races which pushes them further way into New York City. 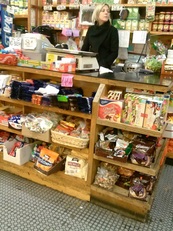 Being a Mexican American is hard enough in my neighborhood because you're looked at funny or even because you aren't polish. Even at the train station I could be sitting down and everyone sitting besides me are polish and talking in their native language. The people even make it seem like just because you aren't polish they will not accept you. I believe it's true from what I have witnessed and from personal experiences. The predominant group doesn’t welcome diversity because they want to keep the kinship between their own kind of people. There is a reason why Greenpoint is sometimes referred to “Little Poland” because of how the populace (the polish people) stays within their own ethnicity and exclude anyone else.


As  mentioned before walking down Manhattan Avenue everyone is mostly caucasian or polish.  So whenever a group of African Americans, Hispanics, Indians, or whatever else ethnicity there is they will get looked at weirdly or given faces of disgust. Why? Maybe because they believe in stereotypes and it's obvious because of the look they give. For example if you were to walk into Associated all the cashiers would be polish ladies and also in certain grocery stores. Such as “Poland Farm Fruit and Vegetables” which I took a picture of the cashier and polish products below.

Cashier from Polish grocery store
If you aren't polish they'll treat you as if you're nothing or give you attitude. That's if you're not polish but if you are they'll welcome you by greeting you in polish, be nicer, and actually start a conversation. The cashiers are polish such as they then have a connection to the polish populace as opposed to another ethnicity. All this means is how the predominant group doesn't want diversity, they like the fact that it's not diversified because they do not welcome change.


The fact that my neighborhood is not diverse is true and upsetting because I thought New York City was diverse. I personally want my neighborhood to be more diverse so it can feel more welcoming so I'd be able to connect more within my community and the people. Shedding light to this situation is important because I hope one day Greenpoint will start being more diverse instead of being segregated. I believe my neighborhood is diverse because of gentrification. That's why it's segregated because the polish populace must have displaced another certain race which made Greenpoint not diverse. If the council in Greenpoint didn't support gentrification there would be more diversity.

Keeping my cultural identity is important to me and my family. Although we are not part of the predominant group in my neighborhood it is still my home. It may not always feel like it but it is. I believe since I live in such a segregated and not diverse neighborhood it has helped me not lose my cultural identity. It’s as if it has made me appreciate my culture more so I won’t lose who I am. It’s as if I am refusing the norm of forgetting who you are in a place where you are meant to forget because you don’t fit in. I’m proud to be a Mexican American and just because I’m not part of the predominant group does not mean otherwise. Though there is some downsides to my neighborhood I don’t think I’d ever move because somewhere I’ve grown accustomed to despite no diversity and the segregation of people.